First Day Of School, First Day of School (say it with Nemo Style)

Finally the day have come for the use of new school bag as my twin started their first day in kindergarten today. Adam wake up very early at 6.30 a.m to prepare himself, followed by Johan. Usually, during the nursery day, they took bath at the nursery but since they already in kindergarten, I want them to wake early as I needs to make a move early (yelah, dah duduk jauh kan..I needs to get the Smartag lah..no need to que ma at the toll plaza).

At the school, the one that is so eager is also the one that crying and don't want to enter the class...sabar ajelah..Johan was so steady, siap terus ambik puzzle tu bila masuk kelas... 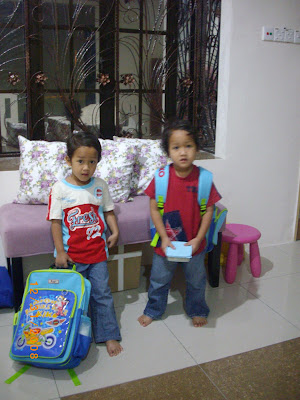 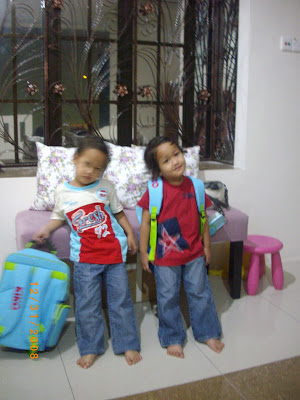 school uniform was not ready yet, so pakai baju biasa dulu..
oppss..rumah tak gantung lansir lagi ye
And I wonder what is their story this afternoon..when I picked them up.
Posted by marie at 9:00 AM

This is a Flickr badge showing public photos and videos from nuri_johan. Make your own badge here.